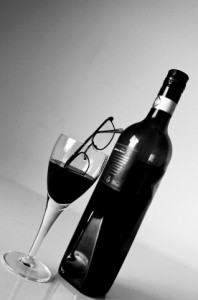 UPDATEI made a huge mistake when I wrote this article! Thanks to the comment someone left I finally realized it and I apologize. Water itself is technically not an alcohol. An alcohol can only exist if the -OH group is attached to a carbon atom. Some will argue that the same is true for an -OH attached to a sulfur atom, but that’s called a thiol, not an alcohol. Water does however contain an alcohol group in a sense. Water can, and does, react with certain organic compounds to form alcohols, especially under harsh conditions (like those that exist in a stomach). However, alcohol formation in a stomach occurs only in a miniscule fraction of all the other reactions that occur. I wrote this article in haste and never truly thought about the actual chemistry. Again, I apologize!

It’s true. You’re an alcoholic. You probably had no idea that you consume up to a gallon or more of alcohol a day. You bath in it too. As for your kids? Them too. You give it to them to drink everyday.

If it wasn’t for Organic Chemistry, I wouldn’t know I was an alcoholic either. However, it doesn’t mean that we’re all consuming boatloads of alcohol (the ethanol, let’s get drunk, kind) everyday. In fact, that would kill you and you really would be someone diagnosed with the medical alcoholism. Don’t do that.

According to organic chemistry principles anything with the functional -OH group is an alcohol. Yes, that means water is technically an alcohol. Unfortunately for all those college kids out there, there is no way to get drunk off of water.

I thought it was really interesting to find out that we all drink an alcohol everyday and no one has really said anything about it. However, I wouldn’t go around telling your friends that water is only an alcohol. Water is classified as a lot of things.

The behavior of the water molecule, for instance it’s polarity, is less indicative of an alcohol.  Alcohols are usually somewhat polar (they can be non-polar!) and most alcohols have a carbon laying around somewhere.  For example, ethanol, the type of alcohol you find in beer, wine, and liquor, has the chemical formula C2H5OH. Alcohols are also usually good organic solvents while water is a somewhat decent organic solvent.

Not all alcohols are alike either.  Ethanol can be the life of a dorm party while methanol would be the death of it.  Methanol, CH3OH, is extremely toxic to humans and as little as 10ml of the stuff can cause you to go blind!  It makes a really good propellant though.

So there’s some interesting trivia for you.  Water is an alcohol.  Just please don’t tell your friends they can drink a gallon of alcohol and be fine.  They’ll think you’re talking about the beer kind.