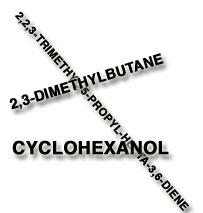 Ever look on the back of a bottle and see some long chemical name like 2,3-dimethylbutane? Ever wonder what those numbers mean or how on Earth someone came up with such a ridiculous name?

Chemical names with all the numbers and long-winded compound words are actually logically ordered and make a lot more sense than I had ever expected. Most compounds named this way are organic chemicals, those containing Carbon atoms… sometimes hundreds of them.

I won’t get into the complicated naming rules and such but here’s a quick description of what the names mean so you know what you’re looking at when you see one!

Let’s take 2,3-dimethylbutane as the first example. The “-but-” part of the name represents a 4 carbon chain (think of butane, C4H10). This part of the name can be swapped out for -eth- (2 carbons), -oct- (8 carbons), and any other suffix describing the number of carbons.

Then there’s the beginning of the name. In this case there’s “methyl” in front of butane. This is a substituent group… basically a side chain of carbons and hydrogens hanging off of the main carbon chain. So, what’s methyl? It’s CH3. The “di-” in front of methyl indicates there are two methyl groups. The “2,3-” indicates that the methyls are attached to the 2nd and 3rd carbons in the 4 carbon chain.

There are tons of other groups that could be attached… for example, ethyl, propyl, butyl, isopropyl, tert-butyl, and the list goes on!

Naming gets much more complicated, and I won’t get into it here, but it’s definitely interesting. If you want to know more I could make another post, just leave a comment below!