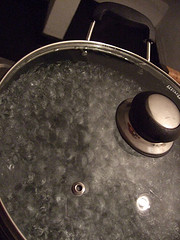 Does boiling sterilize?  I asked my organic chemistry professor this in the lab and the answer is no, boiling water does not sterilize.  That’s not to say that it’s not a good method of killing bacteria.

So then, what’s the problem with putting things in boiling water to sterilize them?  While many bacteria is killed, the vegetative spores usually are not.  The same is true for fungal spores.  Just when you think you’ve killed them all the spores come out of their comas and infect you.

What if boiling is the closest thing to a proper sterilization method you can achieve at your home?  Well, here are some tricks:

Most of the time boiling is an effective method of disinfecting items in a household and even for some elementary experiments.  As long as you’re not piercing something, puncturing any part of your body, or administering things to a very ill person, boiling will usually do the trick.

Need something sterilized?  Go to your local tattoo or piercing parlor and ask if they can sterilize the item in their autoclave.