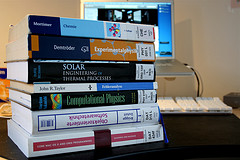 If you’re anything like me when I was starting out my college career then you’re probably wondering which major you should choose.  I flipped between five majors before I finally decided.  The most confusing part was figuring out what each major allowed me to do when I finally got out of college… if I ever got out of college.  Three out of the five majors I was considering were thrown out the window quickly because they were non-chemistry related.  The last two, chemistry and chemical engineering, were the hardest to decide between. What’s the difference between a chemist and a chemical engineer anyway?

In my sophomore I finally had to lock down my decision.  Was I going to be a chemist like all my heroes or be a chemical engineer like all those people you imagine working away at producing harmful chemicals?  My adviser at the time said that it comes down to this: Do you want a lab coat or a hard hat?  However, it’s not that simple of a distinction.

My idea of chemical engineers working in a huge plant creating toxic chemicals is partially correct, some have that job, but most of the time that’s not the case.  Many work on pharmaceuticals (okay, still possibly toxic chemicals and working for “The Man”, I know, bad example), curing diseases, making food products, refining petroleum, engineering plastics, studying properties of liquids, and the list keeps running and running…

Here’s an abbreviated list of the industries you can go into if you’re a chemical engineer:

Seriously, you can do just about anything you want with a chemical engineering degree.  However, it is certainly not the major for everyone.  If you don’t like math and don’t want to give up a ton of free time, then it’s not worth it.  I’m not trying to be a jerk and say “you don’t have what it takes.”  Some people would just be happier spending their time on other things (like being in the chemistry lab!) than doing endless homework and learning Calculus, Differential Equations, various “-dynamics” subjects, and Physics until it comes out your ears.

Chemical engineering is such a broad discipline that it’s easier to describe the limitations of a chemist to help you decide which major to choose.

I love chemistry.  There’s something about being in the lab that’s great.  It’s my home away from home.  All my heroes were chemists (okay, some were technically physicists but they really did more chemistry stuff, they were just confused and wanted to look cooler by calling themselves physicists… I’m just kidding… kind of).  When it came time to decide if I’d follow the footsteps of many of the greats, I didn’t know what to do.  The more I talked to my professors, the more I wasn’t sure chemistry was going to be my choice.  Shocking, I know.  I feel like I’m betraying a trustworthy friend.

Why wasn’t I sure?  The more I talked to people, the more I found out the limitations of studying chemistry as an undergraduate.  Advanced thermodynamics, physics, and some mathematical methods would never be taught to me unless I somehow found time to take those classes on my own.  There would be a chunk of engineering and science knowledge I would lose out on.  Also, to my dismay, I found out that I’d need to be in school for at least 6 years before I could get a job as something other than a lab technician (the vast majority of chemistry majors end up being lab technicians).  I didn’t know if I could afford the extra schooling, both mentally and financially.

On the other hand, if I didn’t end up picking chemistry as my major I would lose out on labs and advanced inorganic and organic chemistry.  Sure, I’d still get the fundamentals as a chemical engineer but I wanted to be on the forefront of chemistry research.

How did I decide?  Let’s come back to that question my adviser asked me; “Do you want a lab coat or a hard hat?”  For me, after awhile, the question broadened: “Do you want to get an advanced degree, learn exciting chemistry principles and possibly discover something that will someday be in textbooks or do you want to have the opportunity to branch off into almost any industry and have the tools to go onto graduate school in almost any science subject?”

I know this post sounded like I’m favoring chemical engineering, but I’m really trying not to.  You should do what makes you happy.  If I were sure that I wanted to be a chemist and have the vast knowledge of principles to one day discover something great, then I would have no problem foregoing the extra math and physics courses a chemical engineer takes.  Same goes for chemical engineering; I’d give up the extra chemistry knowledge if I really wanted to take those physics and math courses.

I’ll make another post about choosing your major.  I think it’s really important that you get all the exposure to what the majors really encompass before you commit to one.

Please leave a comment if you’ve made a decision on a major and how you made that decision.  It doesn’t have to be chemistry related!