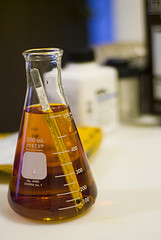 What is the world’s strongest acid? Well, it’s an acid that is ten billion billion times stronger than the acid in our stomachs – hydrochlroic acid. Interestingly, this acid can’t burn through glass, and can be found in gasoline and even vitamins!

So, what is the strongest acid? Technically, the strongest acid ever created is a carborane acid. For all you nerdy chemistry people out there (so the majority of the people reading this!) the chemical formula is HCB11Cl11. This carborane acid has a pH of about -16. Compare that to the pH of HCl (about 1) and you get the idea of how strong it is! Oddly though, the anion part of the acid, or the negative part, forms a very stable molecule; so stable that this acid can be used in pills. This stable molecule is partly the reason why the carborane acid is so strong.


Although one of my favorite chemistry professors drilled it in my brain to never give molecules human traits, I’m going to break the rule to explain this acid! Since the anions of the acid form a very stable molecule, the carborane acid has no problem giving up its H+ atoms. In fact, it’s more favorable to give up those H+ atoms. When it does, the anions go off and form their stable compound while the H+ atoms are left hanging out in the solution, ready to react. And there are lots of them hanging out!

The reason this is technically the world’s strongest acid is because it’s the strongest acid as a single molecule. Much stronger acids- the acids that melt through tables- can be created by mixing certain antimony compounds with hydrofluoric acid (HF). For example when you mix SbF5 with HF, you get an acid with a pH of -31.