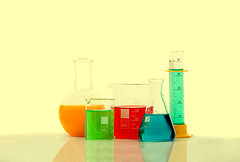 Here are some interesting chemistry facts… who knows, you may some day be on jeopardy.

In the early 1940s a large portion of the world’s plutonium supply was accidentally ingested by a lab technician. The majority of plutonium, like other heavy metals, passes right through your digestive tract. Don’t ask how they recovered all that plutonium…

Did your high school tell you there are three states of matter? Solid, liquid, gas. Or Maybe they threw in a fourth state, plasma. In fact, there are many more than just three or four states of matter. Around absolute zero a lot of funny things happen and new states of matter pop up, like Bose-Einstein condensates which defy gravity.

Watson and Crick, the co-discoverer’s of the DNA double helix never actually ran any experiments on their own, but rather read deeply into others’ work and deduced the structure.

Lithium can alter how you think and has been known to “cure” certain mental illnesses. In fact, lithium is used in a lot of psychoactive drugs.

One of the first x-rays, a picture you’ve probably seen of a woman’s hand with a ring on it, was of Bertha Rontgen’s hand. She thought seeing her bones was a death omen.

People used to drink radioactive water from a device called the “Revigator.” It was considered to be a healthy drink.

Diamonds aren’t the rarest gems on Earth. In fact, they’re relatively common. The rarest gem is jadeite and costs about $3 million per carat.

Gallium, a metal element, will melt in your hand. You can even buy some here.

The letter J is the only letter that doesn’t appear in the periodic table.