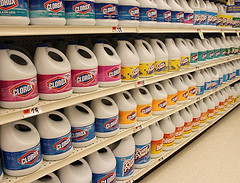 Bleach is pretty cool stuff. It makes it so kids don’t get microbial infections, it can save your life, and it’s surprisingly reactive. Bleach is essentially just a 3-6% mixture of sodium hypochlorite (NaClO) and water, although some bleaches use lye (NaOH), hydrogen peroxide, or calcium peroxide. The regular household bleach, like Clorox brand, is usually the sodium hypochlorite kind.

So, how does bleach even work? When the sodium hypochlorite is in solution it doesn’t stay as the compound NaClO. It actually dissociates (essentially breaks apart) into ions… so Na+, H+, Cl–, and HClO. Some of these ions then join to form Cl2 and H2O in a process called equilibrium.  An easy way to describe it is that all the ions, chlorine, and water are in solution together all at the same time.  The chlorine doesn’t go into the gas phase (lucky for you!) but rather stays in the solution.  Chlorine is nasty stuff and will easily kill bacteria and other unwanted microbes.  Look below for the equilibrium reaction.

How can bleach save your life? If you are ever in a survival situation and need to clean water (so any water that doesn’t come directly from the inside of a plant or from a faucet!) then bleach is your best friend.  If you add four drops of bleach to every quart of water and let it sit for about half an hour, you will have potable water.  The four drops per quart is just enough to kill bacteria but not enough to hurt your digestive system.

Why should you never mix bleach and window cleaner like Windex? It will burn your eyes and lungs like crazy and could be very toxic.  Most window cleaners contain ammonia.  Ammonia and bleach react to form a ton of different compounds.  All those compounds are pretty nasty though.  However, some of the formed compounds are actually used to clean a lot of the public water supply.  For example, one compound formed from the reaction of bleach and ammonia is called chloramine (NH2Cl).  Chloramine is a liquid that’s used in very dilute amounts to clean drinking water.  Is it safe?  That’s hard to say.  It’s unlikely that it will cause any problems in low concentrations, but the long term effects are unknown.  Plus no one really goes around drinking strong solutions of the stuff so no one really has any idea what would happen if a person consumed a ton.

Nitrogen trichloride (NCl3) is another compound formed when bleach and ammonia are mixed.  This stuff is nasty!  Not only is it highly unstable, explosive, and stinky, but it has the same effect as tear gas. It’s yellow just like chlorine gas. A cool note about nitrogen trichloride: it can form in chlorinated swimming pool as a reaction between chlorine and urea… so don’t pee in the pool or you could be tear gassed! Just kidding. Not nearly enough nitrogen trichloride is created when people pee in the pool to even be able to see much of it, let alone feel the effects.

Here are some of the side reactions between bleach and ammonia (courtesy of Wikipedia):