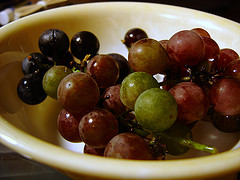 I always heard about a grape producing plasma, but I never believed it would actually work. Turns out it does. Note- for those of you who aren’t familiar, plasma is a phase of matter in which the gas “glows” due to ionization.

How the heck can a simple grape produce a plasma? Grape juice is full of electrolytes, or ions like Na+ and such. This juice is great for conducting electricity, but the grape skin isn’t. If you look up “grape plasma” on YouTube (or simply watch the video below) you’ll see that the grape is prepared by cutting it in half length-wise. Therefore when the grape juice is “excited” by the waves the microwave is pumping out, electrons hit the grape skin wall. What does this do? Heats the grape skin to about 3000 degrees.

3000 degrees is just about hot enough to ionize air. This is what causes the faint blue glow. In fact, it’s the same reaction that occurs when lightening strikes.

Why is the “grape plasma experiment” so dangerous? Aside from the fact that it could destroy your microwave -although I’ve never heard of a microwave being destroyed by it – it creates a toxic gas. That gas is called ozone. Most people think ozone is good, and it is, but it’s only good when it’s up at the boundary of the atmosphere. Ozone can cause you to become really sick by poisoning your blood. On the other hand, ozone can be used to disinfect water.

The other way to see plasma? Go to Spencer’s or some other gift shop and pick up one of those glass balls that “shoot” blue glowing filaments to the glass. It’s actually an electric charge that ionizes air. They’re also fairly safe and there’s little chance you’ll mess up your microwave this way… unless you microwave the thing.

Here’s a cool YouTube video I found on the grape plasma: