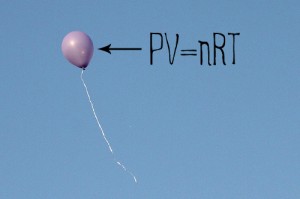 If you’ve ever taken a chemistry class before it’s almost guaranteed that you’ve heard of the ideal gas law. The phrase “pivnert” or just simply PV=nRT makes people cringe almost as much as nails on a blackboard… both due the corniness of the phrase “pivnert” and the fact that about 99% of people despise chemistry and equations in general. This holds true unless you’re a chemical engineer in which case “thank God we’re dealing with an ideal gas” usually comes to mind. At any rate, not many people actually know where the ideal gas law comes from.

Back in the day, specifically a Thursday at noon sometime around 1662, a guy named Robert Boyle discovered that a gas’s volume is inversely related to pressure. It sounds obvious today but back then it was a leap for the physical sciences. In fact, Boyle’s work even influenced Isaac Newton.  Talk about bragging rights.

A little over 100 years later around 1780, Jacques Charles, after launching the world’s first hydrogen balloon and doing other cool stuff, discovered that a gas’s volume is directly related to it’s temperature. This is now known as Charles’ Law, although interestingly enough, Charles never published the law himself. Joseph Louis Gay-Lussac was the one who published the law and credited Charles with discovering the relationship, naming the law after him.  Pretty noble of the guy if you ask me.

Finally, around 1811, Amedeo Avogadro discovered the relationship between the amount of molecules in a gas and a gas’s volume. The result: If the pressure, temperature, and volume of any two ideal gases are the same then each have the same number of molecules present.

With these three laws it is possible to derive the ideal gas law:

where “∝” means “proportional to”

Don’t you feel better now that you know where the ideal gas law came from?  Not exactly bar trivia, but still something to get your brain cranking.