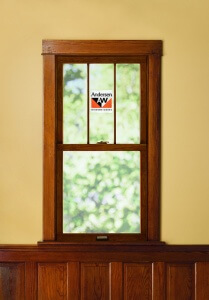 I don’t know about you, but I’m a bit skeptical when people say that having a small amount of air in between two panes of glass will significantly increase insulation and decrease heating costs.  Does it make sense to spend a few hundred dollars on windows that simply have some air in between glass panes?

It turns out that double-paned windows actually make a huge difference.  That extra little space of air is great insulation and helps prevent a ton of heat from escaping; but, why?

A guy named Fourier (some of you may know of Fourier transforms… same guy) came up with a law that models conduction.  Conduction is simply heat flowing through matter (think of electrons moving through a wire).  The law is as follows:

Qconduction is the rate of heat transfer

A is the cross sectional area

dT is the temperature gradient

dx is the distance of separation

and k is the thermal conductivity

For matters of explaining why double paned windows actually work we will only be focusing on k.  “Thermal conductivity” simply means how well a substance transfers heat.  A high number means the substance is great at transferring heat and a low number means that a substance is poor at transferring heat.  For example a diamond has a k value of about 2,300 W/(m*°C) whereas water has a k value of 0.61W/(m*°C).

What about air?  This is where it gets a little tricky.  Moving air is a fairly decent heat conductor because moving air partially transfers heat through convection (ever heard of a convection oven?).  However, still air is actually a really poor conductor of heat.  In fact, still air has a k value of 0.026 W/(m*°C).  That’s really low!  So that little bit of air between two panes of glass makes it significantly harder for heat to move through the window.