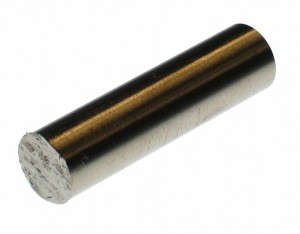 Zirconium.  It’s an element that most forget about, but many should be thankful for.  It probably saves husbands and boyfriends millions of dollars a year; remember seeing cubic zirconia?  It looks a lot like a diamond and is even fairly hard.  Other than fake diamonds what is element number 40 used for?

About 1% of zirconium stockpiles are used in nuclear reactor fuels.  It’s a great element for resisting corrosion but comes with drawbacks.  At the high temperatures that nuclear reactors operate under zirconium can react with water and form hydrogen gas.  The result; a possible explosion.  The small explosion at Three Mile and the explosions at Fukushima I were partly caused by such a reaction.

Okay, so some more practical things this element is used for?  Zirconium is used in vacuum tubes, explosive primers, high heat ceramics in jet turbines, space vehicle parts, and abrasives.

Interesting Fact:  Zirconium used to be used in an ointment that claimed to treat poison ivy.  Turns out that the ointment actually made some people itch even more.

Honestly, zirconium isn’t exactly the rockstar of the elements.  It’s not poisonous, isn’t used in drugs, and doesn’t really react with much.  However, it’s a lesser known element that most people forget about.  Therefore being able to ramble off some of its uses may make people think you’re pretty intelligent… or a major dork.  Next Element of the Day: Cadmium!

Make sure to share this article and tell your friends about ChemistryTwig!