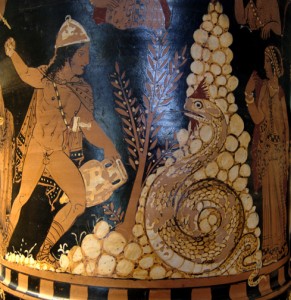 Great for batteries, bad for kidneys. That’s Cadmium. Cadmium is a soft, slightly bluish metal. What most people don’t know is that it is named after a greek mythological character named Cadmus. Cadmus was apparently a pretty intelligent guy; Myth states that he introduced the Phoenician letters to the Greeks. Why was cadmium named after Cadmus? No idea. However, if you’re ever on Jeopardy you now know the question to some answer. It’s a little more odd that it was named after a greek mythological character since it was discovered by two guys in Germany in the 1800s.

Cadmium is a metal that most people know due to its use in Nickel-Cadmium batteries. However, cadmium is also used as a pigment for red, orange, and yellow, it is used to coat metals prone to corrosion, and as a stabilizer in old-school PVC. A small amount of cadmium is used in nuclear reactors to control the rate of fission. Unfortunately, that’s about as exciting as it gets for cadmium’s uses.

Cadmium is rarely used in pigments or as coatings now because of negative environmental and health effects. If you’re a smoker you have a cadmium blood-level that is about 4-5 times higher than an average American. Is it an issue? Possibly. High cadmiun levels can cause renal issues although if you’re healthy in most other ways and have average iron levels you’re probably all right.

That’s about it for cadmium. As long as you stay away from eating batteries and don’t lick old yellow train cars you probably won’t come in direct contact with it.

Next Element of the Day: Krypton