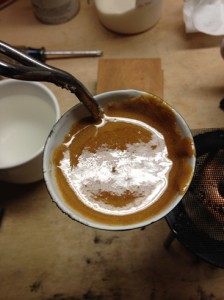 Smoke bombs are really useful when playing paintball and some people find it to be a ton of fun to make a big cloud of smoke. They’re pretty easy to make and made from some fairly safe chemicals.

The term “smoke bomb” incorrectly describes the device. Smoke ball is the technical term (when it’s a ball… if it were a square you now have a smoke square). In fact, smoke bombs aren’t bombs at all. There is no explosion since none of the compounds used in a smoke device nor from the reaction products are explosive. Despite all of this, I will continue referring to them as “smoke bombs” because everyone gets either really confused or laughs a little when you call them “smoke balls.”

What’s in a smoke bomb? Honestly, I’m not exactly sure what makes up store bought smoke bombs, but homemade ones I am pretty familiar with. They’re made of sugar and potassium nitrate. That’s it!

Are the chemicals in a smoke bomb safe? Pretty safe, yeah. I mean sugar could eventually make you diabetic… it might hurt if it got your in eye (not sure, never had it happen). Potassium nitrate, from a health standpoint, is pretty safe. I definitely wouldn’t recommend eating it, but it’s used in some toothpastes and as a preservative in food. The only real danger with potassium nitrate is that it’s an oxidizer. It will (technically) add fuel to the fire, but it’s not explosive or flammable by itself.

None of the compounds produced are all that dangerous. The smoke you are seeing is due to a combination of water vapor and potassium carbonate particles rising in the air. Just like any smoke, you shouldn’t breath it in but it’s highly unlikely to do you any harm. However, there’s another form of a smoke bomb where people use a ping pong ball to hold the device. This really isn’t a good idea. The plastic will burn and make more smoke but it will also release toxic fumes.

I will write another post on smoke bombs soon, seeing as it’s a pretty hot topic.