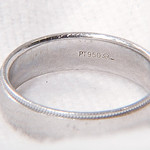 Mines were once abandoned because they contained too much platinum and blocked all the gold and silver. In fact, platinum was essentially worthless throughout almost all of of the 19th century. In 1828 Russia even minted small denomination coins with the metal since they had so much of it.

Oh, how the times have changed. Imagine holding in your hands the first cube of pure platinum produced by Pierre-François Chabaneau; it weighed 23 kg and, in today’s dollars, would be worth about $1,000,000 USD. At the time that cube was essentially worthless. Aristocrats of Europe had no idea of what to do with the metal. It was hard to refine, couldn’t be turned into gold, and was in high supply.

So, what changed? We all know platinum today as highly valuable. In the late 1800s some chemical benefits of the metal were discovered. It was, and is, a great catalyst, anti-corrosive, and can resist heat in electrical applications. However, platinum was in such high supply even though it found uses in industry. It was almost certainly demand that drove up the cost of platinum.


Cartier. Recognize the name? Louis Cartier may be the man to thank for the high value of platinum. He was in search of a metal to use in his jewelry that wouldn’t tarnish or outshine the luster of the diamonds he used. The only metal that resisted tarnishing yet wasn’t very flashy was platinum. Voila! The value of platinum skyrocketed.

Just a word of caution: Even though this is a convincing argument as to why the price of platinum rose, it is not the only one. No one really knows for sure why the metal achieved such value. In actuality it isn’t all that rare of a metal when compared to other precious metals like gold and rhodium. In fact, according to current estimates, platinum is more abundant than gold.

Platinum’s allure permeates through through more facets of our lives than we would normally think of. There are platinum awards, platinum credit cards, platinum rewards, even platinum level certification. Even though gold is currently the most valuable metal we all know that a platinum credit card is better than a gold credit card. Once in awhile it’s interesting to stop and think about what kind of value we place on a substance regardless of its intrinsic, natural value.

What do you think?

Information on Abundance: The abundance of the element, a measure for its rarity, is given in mass fraction as kg in the earth’s crust (CRC Handbook). David R. Lide, ed. (2005). “Section 14, Geophysics, Astronomy, and Acoustics; Abundance of Elements in the Earth’s Crust and in the Sea”. CRC Handbook of Chemistry and Physics (85 ed.). Boca Raton, Florida: CRC Press.