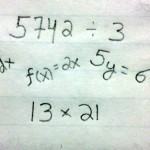 Okay, I won’t lie and say this article directly relates to chemistry in any way. However, this general math knowledge will definitely come in handy whether it’s to impress your friends with quick calculation skills, impress others with mathematics trivia, or even gain a few points on a standardized test (which could ultimately help you advance your chemistry career!). Here are a few mathematics trivia:


I thought those were some pretty interesting mathematics facts that can always double as trivia. As for some calculation shortcuts, here they are:

Hopefully these shortcuts will come in handy one day!