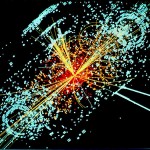 The article points out that is something catastrophic is to happen we’d never even see it coming such it would travel at the speed of light. Still, it’s pretty scary to think about.

I’m not trying to be disrespectful to the scientists who reported this, however it is important to consider that their most recent conclusion may be wrong. This is especially true because if the mass of the Higgs Boson turns out to be slightly greater or less then the universe is stable. Plus, it wouldn’t be the first time that calculations were off (remember the whole, “theory of relativity is wrong” conclusion from a couple years back?).

You should definitely check out the article and read up on the Higgs Boson though. It’s interesting stuff!

Let us know what you think.