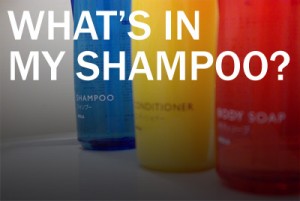 Ever look at the back of your shampoo bottle? There’s usually a huge list of ingredients. Ever wonder what any of those ingredients are? In this series, we’ll be exploring what’s in your shampoo.

Like many other ingredients found in shampoos, cetyl alcohol is fatty. That doesn’t mean it will make you fat if you eat it, that just means it is saturated with hydrogen atoms. The compound is also known as 1-hexadecanol (check out the post on the naming of organic compounds).

Cetyl alcohol can be made from sperm… sperm whales that is. Well, not so much the whales but their fat. In fact, that’s where the name cetyl comes from. Cetus is Latin for whale oil. This chemist by the name of Michel Chevreul found that mixing a component of whale oil, specifically spermaceti from the sperm whale, with potassium hydroxide will create these white flakes. Today we know those flakes as cetyl alcohol. It’s amazing that he could tell the flakes were not simply precipitating potassium hydroxide flakes because the two look similar.

Anyway, it’s pretty unlikely that the cetyl alcohol in your shampoo is made from the oils of sperm whales. That would just cost way too much and I highly doubt any large international company would take the flack of promoting the killing of whales. Cetyl alcohol can also be formed by the catalytic hydrogenation of coconut oils – which is way cheaper and much more likely to be the process of manufacture. Remember coconut from the other shampoo ingredient, cocamide DEA? You’ll definitely be seeing more of coconut in many other shampoo ingredients.

Is cetyl alcohol safe? Pretty much. It can irritate those who suffer from eczema. Well, it’s more likely contaminants found along with cetyl alcohol will do that, but still. It’s odd that cetyl alcohol is used in eczema creams…

Here’s the summary of cetyl alcohol:

Compound: Cetyl alcohol (1-hexadecanol)
Compound origin: Most likely the hydrogenation of coconut oils – although it could be formed from whale oil
Uses: Shampoo thickener
Danger: Not too much – may irritate your skin a little, but impurities are mainly the worry for irritation