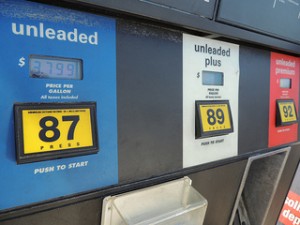 So if you’re anything like me you go to the gas station and fill your car with “89,” or perhaps another number fuel. You probably do this on a bi-weekly basis, if not even weekly or (eeks!) daily, but never have taken a second look at that number. It turns out that the number on the button you press before filling your car with gas is called an octane number. Contrary to what I expected, the octane number has neither much of anything to do with the amount of octane in your fuel, nor does a higher octane number indicate a higher energy fuel.

That number that ranges between the high 80s and mid 90s that is displayed on the gas pump actually indicates how resistant the fuel is to detonation under compression. For instance, a low octane number, say 89, is not relatively resistant to ignition at high compression. That means if you have a high performance car (which usually have high compression ratios) and you run 89 octane fuel you’ll get engine knock. Engine knock can be identified by a literal “knocking” sound or a ping. If the engine knock is really bad you’ll definitely notice because an engine component will likely be damaged and your engine will probably stop working all together.

In a more technical description, engine knock is what occurs when a gas/air mixture is ignited prematurely. The power created by engine is done so by a piston moving up and down in a column. The movement is caused by the ignition of an air/gasoline mixture. When the piston moves upward, the volume of the cylinder is minimized and it compresses the air/fuel mixture in that volume. At a specified time the spark plug lets off a charge and the mixture is ignited. The heat of the reaction and the gases produced make that small volume expand, pushing the cylinder downward. This is where the power is created. The movement of the piston is, through a series of gears and such, transferred to your wheels.

Now, if everything goes as planned, that ignition and expansion will occur at the exact time your car was expecting it. That’s because the ignition system is programmed to ignite the fuel at a specified time. This just ensures that the ignition of fuel and the pressure exerted by the reaction is in line with what your engine components were designed to handle.

Sometimes, especially when you use a gasoline with a lower octane rating than your engine was meant for, (yes, I know it’s tempting to choose the lower priced gas) the whole ignition/expansion thing won’t go as planned. See, when the piston moves upward and compresses the fuel/air mixture, the temperature increases. Some cars have relatively high compression ratios – that is the engine is designed in such a way that the piston compresses the air/gas mixture into a relatively smaller volume than other engines do. Say you use a lower octane rated fuel than your engine was designed for. That increase in temperature due to the relatively high compression will cause the lower octane fuel to ignite earlier than desired. Again, that’s just because a lower octane fuel is not designed to withstand high compression before spontaneously igniting. This early ignition and fast burning of fuel may cause a faster pressure release than your engine was designed to handle. It basically just puts a ton of stress on your engine components. Imagine expecting to catch a baseball but instead are thrown a bowling ball – that’s how your engine would feel in this case.

Now that we all are on the same page with engine knock and why it’s important to put the right octane level fuel in your car, let’s discuss the actual meaning of the gasoline octane number.

As mentioned before, the octane number doesn’t actually tell you how much octane is in your fuel… which is weird. That’s ok though, because it’s easily explained. Octanes are actually found in gasoline. They are hydrocarbon chains (chains of linked carbons with attached hydrogen atoms). One type of octane is called iso-octane. It is iso-otane that is used as the standard for the octane rating in gasoline. Why they do not call it the iso-octane number, I do not know. Probably didn’t have the right ring to it.

Anyway, the octane number is determined by finding a mixture of iso-octane (also known as 2,2,4-trimethylpentane, see Naming of Organic Compounds) and heptane that has the same anti-knocking attributes as the gasoline blend of interest. The iso-octane/heptane mixtures and their respective anti-knocking characteristics have been tabulated over time. A gasoline ready for testing will be put in an engine and subjected to various compression ratios. Once the anti-knocking characteristics have been determined, the matching iso-octane/heptane blend is matched and the fuel gets its octane number. Say the fuel’s anti-knock attributes match that of a 90% iso-octane/10% heptane mixture; that would be a gasoline with a 90 octane rating.

Okay, now to make things a little bit confusing. Depending on which country you live in, the octane rating on your fuel may be different. No, it’s not becuase of some weird geographical effect, it’s simply the way the octane level is tested. There are two types of standardized octane numbers (… yet 3 ways of reporting those numbers). One of those octane numbers is referred to as the RON, or Research Octane Number. This octane number is determined by running the sample in an engine with variable compression ratios and at a speed of 600 rpm. The RON is the reported octane number in all of Australia and Europe. It’s usually about 4 octane numbers different than what is reported in the US and Canada. Why, you may ask? The US and Canada (along with some other North and South American countries) use the average of the RON and the MON.

Oh boy, what’s MON? MON stands for Motor Octane Number. This is also an odd naming convention because the RON is also determined from a test run in a motor but… oh well. The MON is determined by running the engine at more realistic, albeit only a little more realistic, conditions. It’s basically a test with the engine under some sort of load. The conditions are at 900 rpm, pre-warmed fuel, and variable ignition timing. The MON is usually about 8 – 10 octane numbers lower than the RON.

As mentioned, the US, Canada and a few other nations on the North and South American continents use an average of the RON and MON to come up with a reported octane number which, get ready for another acronym, is called the AKI. AKI stands for Anti-Knock index. Why there are so many indices, I do not know.

Did I mention that the octane number can be above 100? Wait, you may say, isn’t that impossible since there’s no way to have a mixture containing greater than 100% iso-octane? Yes, that is true. However, iso-octane is not the best compound out there for resisting engine knock. But hey, we already called it the octane rating, so we have to stick with using iso-octane as the base.

On top of all this, there are other measured characteristics of fuel, some that are more important to diesel than gasoline. Perhaps in a future post I’ll go over those as well.

By the way, this is the 100th post on ChemistryTwig.com! I hope you have all enjoyed reading this blog over the past 100 posts!

Feel free to leave any comments or ask questions!

[Sources] Wikipedia Octane Rating, Wikipedia Engine Knocking, and my friend who reads way too much Reddit