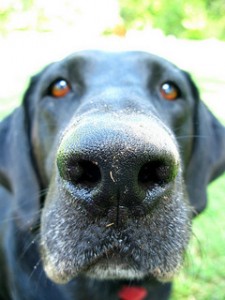 Did you know that humans can distinguish nearly 16 million different odors? How about that the patch of nerves that can sense odors in our nose is about the size of a stamp and is a yellow color? Even better, did you know that the smell of coffee can be described by the number 7683?

The chemistry of smelling is still being discovered and researched, but we have learned quite a few interesting things about smells and how humans, well, smell them. Scientists have come up with a way to number smells and even determine, based on the shape of a molecule, what something will likely smell like.


So, how does a smell even come about? In order to smell a smell, the substance needs to be volatile. That basically just means that it can evaporate in air and travel through air. That’s why you can’t really smell a rock, but you can smell alcohol. So, once a substance evaporates in the air, it may find its place in the air you breathe.

About 1-2% of each breath you take hits your olfactory cells. This is where the magic happens. That yellow stamp sized patch of cells I mentioned earlier is the group of cells known as your olfactory organ. The smelly substance will latch onto some of the olfactory cells and an electric signal will be sent up the cilia to your brain. At that point, you will finally smell something.

Here are some awesome and interesting facts about smells, smelling, and the chemistry behind smelling:

Hope you found these tidbits about the chemistry of smell and how smell works as interesting as I did!