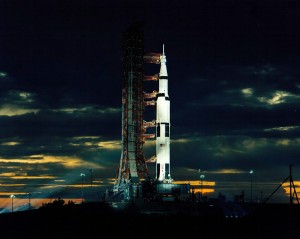 Just a quick tidbit of fun information today! I just learned that the first stage of the Saturn V rocket was fueled by kerosene and got the equivalent to 5 inches/gallon! Why use kerosene instead of liquid hydrogen like the other two stages? It turns out that the energy density per unit volume for kerosene is higher than that of liquid hydrogen.