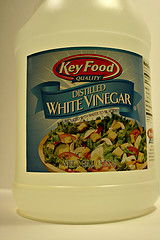 Vinegar is great for taking odors out of the air. Have a smelly kitchen after cooking fish? Throw a little vinegar in a pot of water and let it boil. A few minutes later you’ll notice the offending odors disappear. Pretty cool, huh?

I don’t know about you, but when I first heard that vinegar can remove odors I didn’t believe it. I mean, vinegar kind of smells on it’s own. When you boil the water and vinegar mixture you’ll notice a faint vinegar smell but it soon fades away with all the other odors.

Why does vinegar remove odors from the air? Why doesn’t boiling vinegar make everything stink like vinegar?

It turns out that most odors are alkali – that is they have a pH above 7 (generally). Vinegar, as you may know, is an acid. When you boil a water and vinegar mixture, some vinegar molecules become attached to the vaporizing water molecules and are spread throughout the room. Upon coming in contact with the alkali odor molecules, an acid/base nuetralization reaction occurs. Voila! No more odor.

The acid-base nuetralization reaction is also the same reason you will no longer be able to smell the vinegar either.

Hope you learned something new today! Share with your friends if you enjoyed the article!