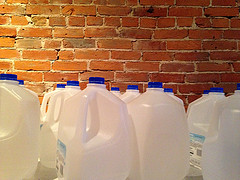 The simple answer is that a gallon of water weighs about 8.3 pounds. However, this answer comes with a caveat.

Someone trying to be smart with you (or just taking the question literally) may tell you that it’s a trick question that has no answer the way it was asked. They may also simply ask for the temperature of the water. The thing is, assuming we are talking about liquid water, the weight per gallon, referred to as the density, of water will fluctuate with temperature.

Why does the density of water fluctuate with temperature? Temperature is one way to measure the amount if energy something has. Higher temperature correlates to higher energy. In the case of water, a higher energy will cause the individual water molecules to vibrate. When they vibrate they push their neighbors to the side. Basically, each molecule wants a little more personal space.

Now, imagine you have a gymnasium and you draw a square on the floor that fills half the gymnasium. This square will represent a gallon. You pack one hundred people into the square. I mean, you really pack them in tight like a subway at rush hour. Then you pump some energy into the room.

You get people moving. Now each person needs a little room and, what happens? Some people get pushed out of the square. Before you had 100 per square but now you have maybe 75 people in the square. That is to say the density in the square decreased with increasing energy. That’s exactly what happens when the temperature of water rises.

Hope this will help clear up any questions about the weight of a gallon of water!