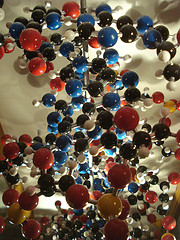 Deep in a lab during a time when it was not widely accepted to question the origins of life, two chemists claimed to have created exactly that in a test tube. Well, figuratively speaking of course… the test tube part, not the origins of life part. The experiment was actually carried out in various flasks.

The experiment is known as the Miller-Urey experiment, named after the two scientists pioneering the work, Stanley Miller and Harold Urey. The two carried out the experiments in an attempt to test the hypothesis proposed by Alexander Oparin and J. B. S. Haldane that stated the early conditions on Earth favored the creation of complex organic molecules from simple precursors.

It’s quite fascinating that the experiment showed that the molecular building blocks of life can be created in laboratory. The chemistry behind the experiment is fascinating and I strongly encourage you to explore the topic more as I can not begin to do it justice in this one article (perhaps I’ll do more research and write another on it if you’d all be interested!). Here’s a good source for more information: Princeton – Urey-Miller

For all you chemistry geeks out there, the original Urey-Miller apparatus still exists and is on display at the Denver Museum of Nature and Science in Denver, Colorado, USA. [Source 2] I’ll confirm it’s there when I visit in the near future (be sure to check back for pictures!).

[Source 1]: Chemists discover the origins of life in a cardboard box