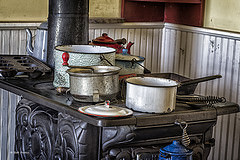 You probably do it every day but don’t know much about it. Or at least the science behind it. I know that’s how I was with cooking. Believe it or not, there’s a lot going on behind the scenes with cooking.

The science is actually quite fascinating. For example, did you know that the type of pan you use in the oven can help lower your energy bill? Or how about that the placement of pans in an oven can cause on dish to come out fantastic and the other could still be raw? Keep reading to learn about some of the science behind cooking!

1. Nearly 75% of the heating in an oven is due to radiation. Although, it may not be the kind of radiation you’re thinking of. This type of radiation is radiant heat, like that you feel from the sun.

2. Food will cook slower in a shiny metal pan in the oven. As you learned from #1, radiant heat causes most of the heating in the oven. Shiny metals block electromagnetic waves (radiation). Therefore, they heat much slower in the oven than a dull metal pan.

When it comes to pans, it’s all about the emissivity. Emissivity is basically how well something transfers radiant heat. It turns out that a glass pan is nearly the same in emissivity as a dark metal pan. That’s why food baking in glass pans will brown where it touches the glass.

3. Cooking with a dark pan can lower your energy bill. Since dark pans transmit radiant heat more efficiently, cooking with them in the oven can reduce cooking times, saving you money in the end.

4. Staggering pans in an oven will make your food cook better. Ovens operate on currents of heat. Just like ocean currents, the air in an oven moves from hot to cold. In most ovens there is a coil in the bottom of the oven. The air is heated by this coil and it rises, likely along the sides of the oven. The air cools slightly as it rises and falls down in the center of the oven. When it falls it encounters the pans and flows around them. If one pan is stacked upon the other then the bottom pan won’t be heated as well and the food won’t cook nearly as fast.

5. Why does a potato cook faster in boiling water than in the oven? Have you noticed that it takes forever to cook a potato in the oven?

Even though the oven is at ~200 C (~400 F), it takes up to an hour to cook in the oven. Take that same potato and throw it in boiling water (100 C or 212 F) and it takes a fraction of the time to cook. Why? Because water is a better conductor of heat than air. In fact, water conducts heat above 20 times better than air! That’s the reason you can stick your hand in a hot oven for a few seconds but you can’t stick it in a pot of boiling water.

8. Metal in your microwave burns out the magnetron. The magnetron (the thing that produces microwaves) will get burnt out if enough microwaves are sent back to it. As we mentioned before, shiny metal and metal in general will reflect many types of waves. Microwaves are no exception. Metal is dangerous in a microwave not because the metal will get hot but mainly because it sends microwaves straight back to the magnetron where it may overheat and spark.

Hope you found some of these facts interesting! As always, pass them on to your friends!