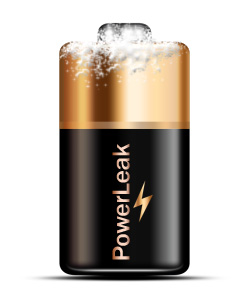 What’s that white stuff that leaks out of batteries? You know what I’m talking about. You open your remote to change the batteries after about 3 years and notice there is white crusty stuff caked on the top of the battery and all around that springy thing that holds the battery tightly in place.

If it’s an alkaline battery (which, if you’re in the US, it’s pretty likely since they account for about 80% of batteries found in the US), that white crusty stuff is likely the salt called potassium carbonate, K2CO3. How the heck does a salt form on a battery that has liquid inside?
{adinserter 1}
Alkaline batteries use the electrolyte potassium hydroxide, or KOH. The KOH in the battery is liquid and it’s very basic (meaning it has a high pH). As the battery discharges a little bit of hydrogen gas is released. Eventually the gas may cause the battery to rupture.

Once the battery ruptures, a small amount of potassium hydroxide, or KOH, is released. One interesting property of KOH is that it “absorbs” carbon dioxide, CO2, from the air. The reaction is:

You’ll notice one of the substances formed is the salt, potassium carbonate. That’s likely the solid “crusty” stuff, although it’s probably mixed with crystallized KOH and/or liquid KOH.

Are the white crystals from the leaking battery dangerous? Well, maybe. If the white solids on the battery are truly and only potassium carbonate, then it’s not dangerous to the touch. However, it’s likely not pure and probably contains some KOH. In general, KOH can be pretty nasty stuff. It is strongly alkaline (high pH) and can cause chemical burns. So be sure to wash your hands with plenty of water after touching the white stuff leaking out of a battery!