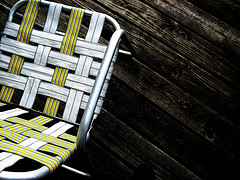 This is probably something most people don’t think about often, but a chemistry nerd totally would! Have you ever noticed that many lawn chairs are made out of aluminum?

Lawn chairs aren’t made out of aluminum just because aluminum is cheap (in fact, it’s more expensive than some cheap metals). Aluminum is not only super light but it’s also super strong. In fact, aluminum is generally stronger than some steels on a per pound basis. Whether its yield strength is higher than steel is a matter of argument, however there’s no doubt that aluminum is super strong for a given weight.

But… there’s another reason aluminum is such a good choice for lawn chairs. When’s the last time you’ve seen an aluminum lawn chair rust? Probably never (okay, except for the screws).

Usually lawn chairs are used outside where they may get wet, get scratched, and have things poured on them. A steel lawn chair would break, get snapped, and rust like crazy if exposed to environments like that. The reason aluminum doesn’t rust, other than the fact that there’s no iron in it to make iron oxide, is because aluminum reacts with oxygen to form a protective layer.

The protective layer that forms is called aluminum oxide. Say the layer gets scratched. A new layer of aluminum is then exposed and the reaction with oxygen occurs again. The lawn chair literally protects itself. In a way, it’s self healing.

The reaction between aluminum and oxygen is described by the following:

Now you know some oddball trivia the next time you’re sitting around a campfire with your friends.