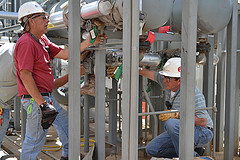 The fact of the matter is, most of us are never exposed to chemical engineers or ever really taught anything about engineers in general. When someone says, “She’s an engineer,” everyone just thinks of either a person in a hard hat designing a bridge or a nerd in a lab.

I know when I was starting out my education and I learned of the profession referred to as “chemical engineering” I had absolutely no idea what it was. Literally, not a clue. I thought it meant a person who designs molecules in some fancy lab with a computer that magically cuts the molecules out with lasers. I know, sounds totally ridiculous. That’s just what those shows like CSI made me think of.

Then you go to school, take a bunch of chemical engineering courses, get out of school (hopefully, I mean, someday, right?), and still have no idea how to answer the question, “so what is a chemical engineer?”

So, what is a chemical engineer?

When I say “chemicals” I want to stress that can mean either biochemicals or traditional chemicals (everyone thinks of those strong smelling chemicals and cleaners under their sink). We’re talking cells, strands of DNA, beer, bio-pharmaceuticals or enzymes along with gasoline, bleach, or glass cleaner. Pretty much anything you use on a daily basis that is something other than computer code, a chemical engineer “touched” it somewhere along its production. In fact, it’s possible a chemical engineer wrote part of that computer code too.

From my experience, I know that many chemical engineers end up in jobs where they make sure a chemical plant keeps running and optimize the plant’s production so that more product is made with less resources (okay, lets face it, basically make sure they make the most money by putting in the least money).

Maybe you’ve driven by a refinery at some point in your life or have at least seen pictures of one. You may have remembered all those pipes slinking all over the place and all those towers (that you may have mistaken for smokestacks but are likely distillation or absorption columns). All that equipment was designed by chemical and mechanical engineers. The people in charge of making sure the production keeps running are likely chemical engineers as well.

Chemical engineers can also be found in chemical plants that produce things like ammonia for fertilizer and cleaning products, or in a paper mill, or perhaps in a brewery. Why? Because of those plants make something from chemicals and need to transport those fluids and chemicals around the plant (or brewery). I know I was shocked to find out breweries hire chemical engineers. Pretty cool, huh?

The great thing about a chemical engineer is that he or she is exposed to many math, science, and physics courses during their studies. Thus they are well trained to learn a variety of topics quickly and efficiently by building on his knowledge of the basics.

I hope this helped clear up some of the confusion surrounding the roles of a chemical engineer. There are just so many roles a chemical engineer can hold that it’s hard to pinpoint an exact definition. However, it’s important know the basics – a chemical engineer combines his knowledge of chemistry, physics, and fluid flow (well, thermodynamics, kinetics, biochemistry… as well) to make, transport, and study anything made with molecules.

Be sure to leave a comment below if you have any questions or input on what a chemical engineer does.