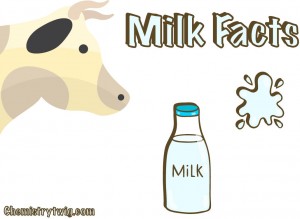 You see milk all the time at the grocery store. If you’re anything like 99% of all Americans, you probably purchase milk. Did you know that in the US alone over 20 billion gallons (75.7 billion liters) of milk are produced each year?

Ever notice some cartons have notes like “rBGH Free,” “homogenized,” “organic,” and “pasteurized”? There are so many labels! What do all those labels on milk mean?

In this post I’ll explore the homogenization of milk. It’s actually pretty interesting. Homogenizing milk means something different than I ever expected!

Why homogenize milk? Milk is a mixture – more specifically an emulsion. It contains water, fats, sugars, vitamins, and proteins. However, milk needs to be homogenized because of the fats. As you have probably experienced by mixing cooking oil (a fat) and water, fats and water will separate. Same thing happens with milk. When milk is left to sit for long periods the fat globules will cluster. The clusters are less dense than the rest of the milk and will rise to the top. This is known as “creaming.” Interestingly, the fat globules in goat’s milk are so small that they can’t clump and float to the top. Thus, goat’s milk does not cream.

In order to stop milk from creaming, it’s homogenized. Since very small fat droplets are formed after homogenization, the surface area of fats is increased when compared to unhomogenized milk. To make a long story short, the small fat globules are stabilized by proteins and are less likely to cause creaming (and separation of milk into different parts). The proteins that stabilize the fat globules are mainly casein subunits and serum proteins. Homogenized milk is whiter and more thick than unhomogenized milk with the same fat content.

If you want to see a milk homogenizer (homogeniser for the British English folks) in action, check out the video below!