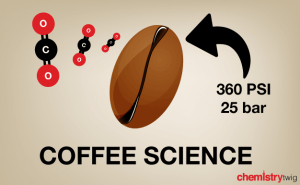 One of the coolest things about coffee beans: They can take a beating! Like, a serious beating. Coffee beans are roasted at temperatures between 160 – 240 °C (320 to 465 °F). It’s basically a controlled burning of the bean.

The bean starts out as green. Depending on the level of roasting, the color change to anywhere from a light cinnamon to dark brown.3 Thousands of reactions take place during roasting. While many reactions produce flavoring compounds, the biggest product is CO2. Believe it or not, for every 1 kg of coffee beans, up to 12 L of CO2 is produced.2

The walls of the coffee bean are super tough and don’t break during the roasting. All that CO2 builds up and pushes on the coffee bean wall. So much so that the pressure can reach up to 25 bar, or a little over 360 psi!2 That’s about 10 times the pressure of a typical car tire. Or, to put it another way, you’d have to dive down around 800 feet below the ocean surface to reach that pressure.

Another cool bit about coffee beans: They’re not actually beans! A coffee “bean” is the seed of a coffee tree cherry.3 They’re just called beans because they look so much like an actual bean.

Tell us in the comments below if you know of any other cool coffee bean facts!