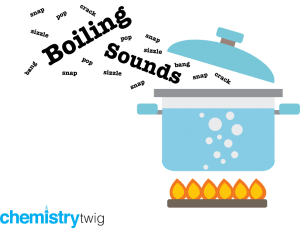 You put a pot of water on the stove to boil. You hear some hissing. Then some popping. A few loud bangs. Then all goes quiet. Out of nowhere, BAM! The water starts boiling like crazy with all these bubbles bursting. What is that hissing sound? What about the bangs? And why does water go quiet before it boils?

Boiling water is actually pretty interesting. In fact, when you boil water you can see heat transfer happening. Lets start at the beginning.

You turn the stove top to 10. The pot of water hits the hot surface and things get going. The temperature of the metal pan right above the stove top gets hot first. So the water touching it begins to get hot.

You might see the water “swirl” and move in waves. Why does the water look like it’s moving even though you’re not stirring it? It’s because that water touching the bottom of the pan is hotter than the rest of the water in the pan. Hot water is less dense than cold water. Since it’s less dense this hot water begins to “float” toward the top. It doesn’t usually reach it though since it transfers that heat to the rest of the water first. This swirling is essentially convective heat transfer.


Soon, the swirling fades as the water temperature becomes more uniform throughout the pan. You start to hear hissing. Then it turns to popping and loud banging. This is really cool! You’re witnessing nucleate boiling! Nucleate boiling is when the water just above the pan bottom is way hotter than the rest of the liquid and actually begins to boil.

Vapor bubbles form at the pan surface just above the stove top, rise toward the top of the water and come into contact with the colder water. Then, BAM! BANG! POP! The vapor bubbles collapse. The bubbles rapidly transfer heat to the bulk fluid and cause a loud pop as they get sucked back into the water. Super cool!

Why the bang? Well, it’s a few things going on. Those bubbles of water vapor have a lot of energy. The energy went from the stove, to the pan, then to the water. The water changed from liquid to gas. All that energy is stored in the gas bubble. The gas bubble hits the cold water and transfers that energy to the cold water. It happens so rapidly that some of the energy scatters and gets transferred into pressure waves which we pick up as loud bangs. Super cool!

Then, all goes silent. At this point the rest of the water is being heated to its boiling point. The temperature of all the water in the pan is close enough to the pan surface temperature that no noticeable amount of boiling occurs.

Boiling water is actually super cool because you can see heat transfer happening. I mean, think about it, you can’t see temperature changing; but seeing water boiling is one way to get close. So go boil some water and take a minute to marvel at witnessing the movement of heat!

*Ok, ok, technically water does get hotter if there are minerals in it. As it boils the concentration of minerals gets higher because minerals don’t boil off at temperatures reached on a stove top. A salt solution, or one with minerals in it, boils at a temperature higher than water because of inter-molecular interactions. In reality, you’d barely notice any change in boiling temperature on your stove top because of this. If anything, you’d notice a bigger change in boiling temperature due to living above seal level.