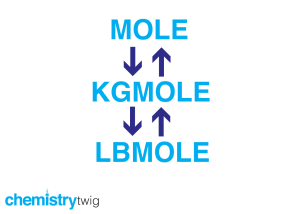 There are many different types of moles, which is super confusing. The most common are regular moles, which are actually gram moles or simply, gmoles. There are also kilogram moles, or kgmoles. Next are pound moles, or lbmoles.

Let’s look at how to convert between the different moles.

This one’s pretty straight forward. Since a mole usually refers to gmole, the conversion between a mole and a kgmole is as simple as converting grams to kilograms:

Let’s say you have 221 gmoles of carbon. How many kgmoles do you have?

Switching a mole to a lbmole is actually easier than I had ever expected. It’s as simple as converting a gram to pounds:

Let’s say you have 221 gmoles of carbon. How many lbmoles do you have?

This conversion is really just a derivative of the above two, but let’s take a look just to be clear:

Let’s say you have 1,530 lbmoles of hydrogen. How many kgmoles do you have?

For example, think of a hydrogen plant in a refinery producing around 80 million standard cubic feet per day of hydrogen; that equates to roughly 95,630 kgmoles of hydrogen per day. If you stated that same number in gmoles it would be 95,630,000 gmoles. That’s a mouthful! Plus, to be exact, it’s actually 95,630,633 gmoles. Not only is it a pain to say, bu is it necessary to specify the last 633 gmoles? Given the large amount of hydrogen, the 633 gmoles probably fall within measurement error. It’s much easier to just use kgmoles.

So what’s the point of lbmoles? If you really need to report something in lbmoles, can’t you just convert from kgmoles or gmoles? Sure! However, it’s probably a lot easier in some cases to just keep everything in lbmoles.

Imagine you have 1000 lb of hydrogen peroxide and want to know how many pounds of oxygen it will produce when it decomposes. Let’s go through the example just to prove that using lbmoles is easier in this case:

According to the above chemical reaction, 1 lbmole of H2O2 will produce 1 lbmole of O2. So, that means:

Now, we could have done the above example by converting everything into grams first and then to pounds at the end. However the way we just did it avoided two conversion steps and thus eliminated two possible chances of error!

Let us know if you have any questions about moles, kgmoles, lbmoles, or any other type of moles you’re familiar with.