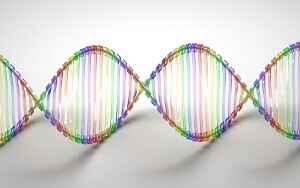 I had no idea that DNA shared this ability with a rock, metal, or – for those refinery and industrial workers out there – Nomex®. The same stuff that makes up your very being has such a practical and life-saving purpose that it’s been generally looked over.

Your local fire department probably has no idea what their DNA is capable of. Well, at least not the potential DNA has to help at his or her job.

Usually DNA and heat don’t mix well. Source 1, 2 That’s because DNA will denature – or, basically, unwind – when exposed to heat; This is because there is a bunch of energy stored in that double helix. The twisting and turning of the DNA strand we know so well puts a lot of pressure on the bonds between those ladder rungs and the rail. Add some heat to the mix and POP! There goes that double helix.

The thing is, DNA has some tricks up its sleeve. It’s essentially biologically useless when heated. However, what if we look beyond the biological uses? That’s exactly what a few researchers in Italy did.

See, most of us forget that DNA is still made up of some chemical compounds (elements, to be exact). We just think of DNA as some magical biological unit that tells our bodies how to look and our cells how to function. There’s much more to deoxyribonucleic acid than that.

It turns out that DNA is a flame retardant.[Source 3] DNA contains three components that make it a great at inhibiting flame.

The deoxyribose units form char and release water when they are heated. Char is basically burned “stuff” that can’t burn anymore and forms a protective layer on fabric.

The phosphate groups in DNA can form phosphoric acid when combined with water (which is released by burning deoxyribose units). Phosphoric acid causes the underlying material to char and form a protective glassy layer of carbon. This layer essentially seals the underlying material, preventing any further flammable gases from escaping and catching fire.[Source 4] It’s like shutting off the propane valve on your grill: no more flame! In fact, phosphorus-based flame retardants are pretty common in things like furniture, mattresses, and other household items.

Lastly, the nitrogen-containing bases (example: guanine, thymine, etc) found in DNA may release ammonia when heated. It is possible that ammonia and phosphate react under the high heat environment to produce a form of ammonium polyphosphate, a known flame retardant.

There you have it – an alternative use for DNA!